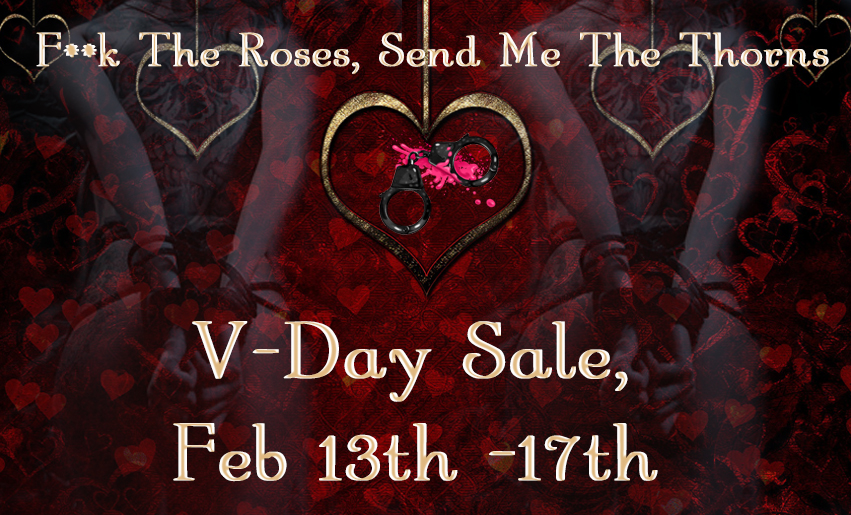 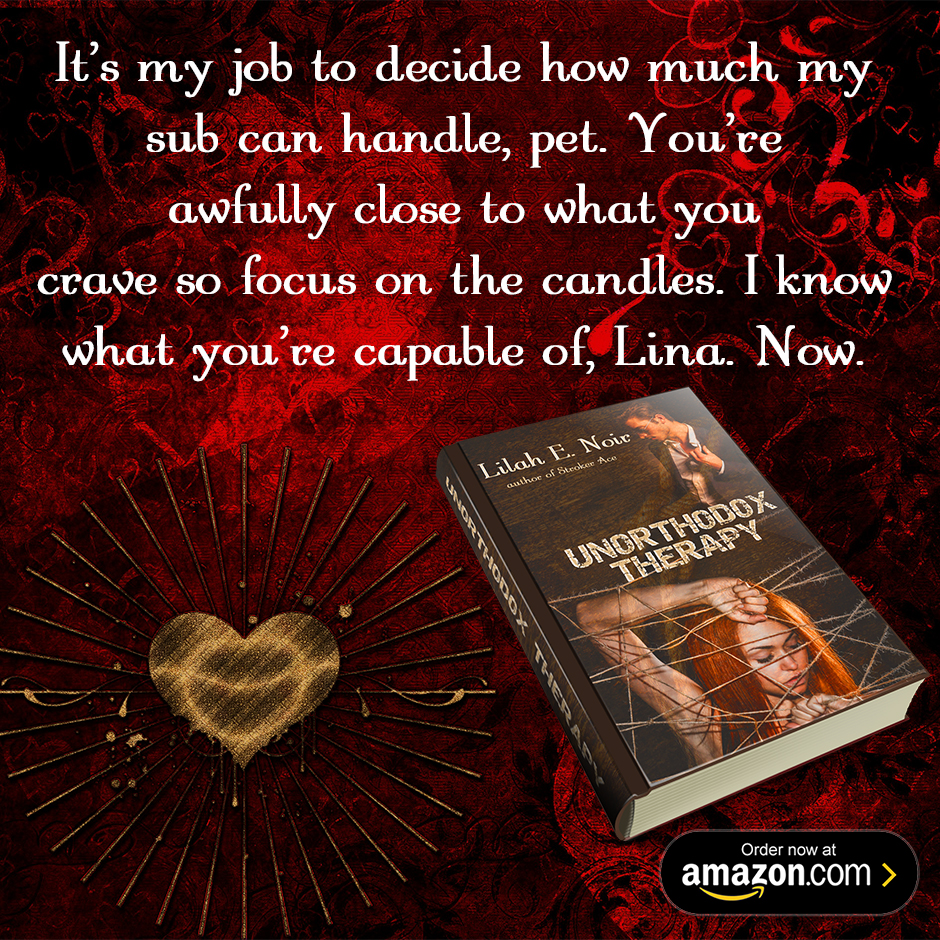 I’ve no intention of explaining my every command to you, pet. As a matter of fact, quit asking questions and do as you’re told. Take your clothes off. Now.
Lina Riley has proved herself as the tough as nails CEO of her own tech startup. She’s a masterful business negotiator, successful by any measure, but every day she’s losing her battle with nicotine addiction. Thomas Jett, her former protégé, is a rising star in software development, one of her most promising employees. He might just have the right solution to her problems.
To the world, Thomas is a sweet, refined gentleman. He opens doors for ladies and lights their cigarettes, not that Lina should be smoking in the first place. Little does she suspect him of having secret life: one of firm discipline, intense sexual dominance, and a well-equipped dungeon.
Lina will agree to play by his rules: a master’s discipline and uncompromising control. Spanking is merely the start of Lina experiencing her wildest and most shameful fantasies. She’ll learn the cruelty of orgasm denial and the thrill of submission at Thomas’ feet.
Is their depraved passion and lust for each other what they truly need? Or will it lead them to disgrace and heartbreak?

“What dirty secrets?” The pain in my breast was acute and throbbing, even with the comfort of his tender tongue.
Thomas placed his hand on my inner thigh and dipped his fingers in the thick film of sweat and pussy juices covering my skin.
“Mmm, I don’t know, boss. I remember this one time we had a boardroom meeting.” When he continued speaking, my fingers twitched. Thomas noticed and immediately slapped my wrist. The impact was not as strong as the bite but still enough to draw my attention. “So, there you were, preparing the last details of the presentation. You were breathing hard, like a woman who was just fucked.” Thomas speared his fingers in front of my face to show the glistening juices running down his knuckles. “I already knew you well enough. You were never shy or nervous at all about pitching your ideas. You had received your nicotine fix. Besides, I could smell you so clearly…” He brought his fingers closer to my lips so I could smell my own spicy fluids. “You were horny, weren’t you? Like a bitch in heat. If only you’d been honest back then I would have taken care of you.”
“These are all speculations, Thomas.” Why did he have to be so observant? The thought he
had known all these years embarrassed me but it also thrilled me.

THE BRAT WITH THE PHOENIX TATTOO: SUMMER 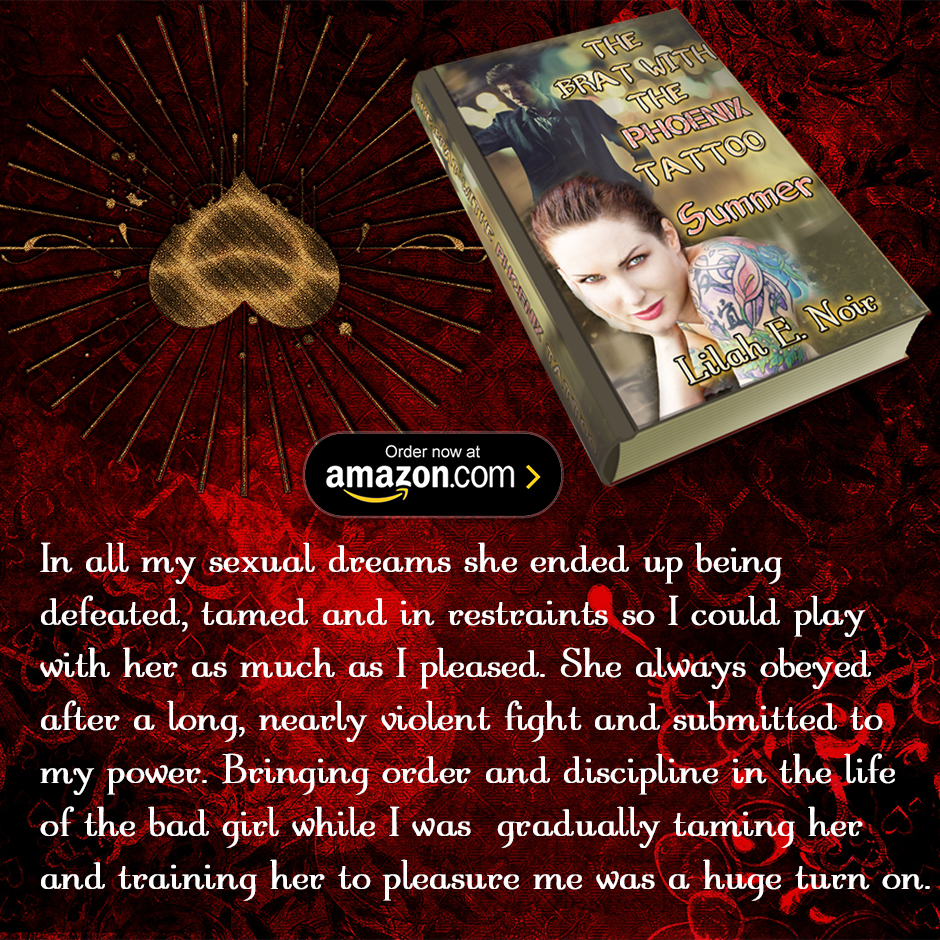 Sage Phoenix has been the thorn in Paul Skyler’s side ever since their final night of high school. She was a bright spot of chaos in his cerebral world of logic and order. The manic pixie dream girl who drove him crazy and left him panting, seduced and longing for more of her spell. The only woman who ever saw him in his most naked and vulnerable state.
For years Paul’s been dreaming of nothing but giving her a taste of her own poison. When he spots Sage behind the glass of her run down tattoo studio he knows he’d never get a better chance. His briefcase contains everything necessary to punish her, put her through her paces and keep her on the edge and at his mercy… just to humiliate her completely and leave her bound to her own tattoo chair.
Little does he suspect that by the end of the night he’d be too addicted to their power exchange to walk away. Little does she know that by the end of the summer she’d be completely under his spell.

It was time to finally reveal my cards and stop playing softly with her. Without saying
another word I fisted her hair and yanked it back so hard she actually screamed in pain. I laid her down on the chair and inclined her so that our faces were touching. My body had her pinned, leaving her with no options to escape. Sage moaned in surprise but didn’t raise her hands again, letting me win while she was stuck, panting and slowly losing the game. Her skin was getting hotter with each minute. For the first time since I’ve known her, Sage looked frightened and aroused at the same time, a combination that always made me rock hard.
“Do you really think one minute in your pussy could make it up for all the trouble and
grief I had when dealing with you, little brat?” She raised her legs and dug the heels of her boots in the leather, trying desperately to keep control and failing miserably. I yanked her hair again so hard that the skin at the root of her hair went red with the intensity of the pull. She was still shell shocked with my sudden aggression and laid beneath me, panting, with her pupils slowly dilating.
Sage was right where I wanted her to be. 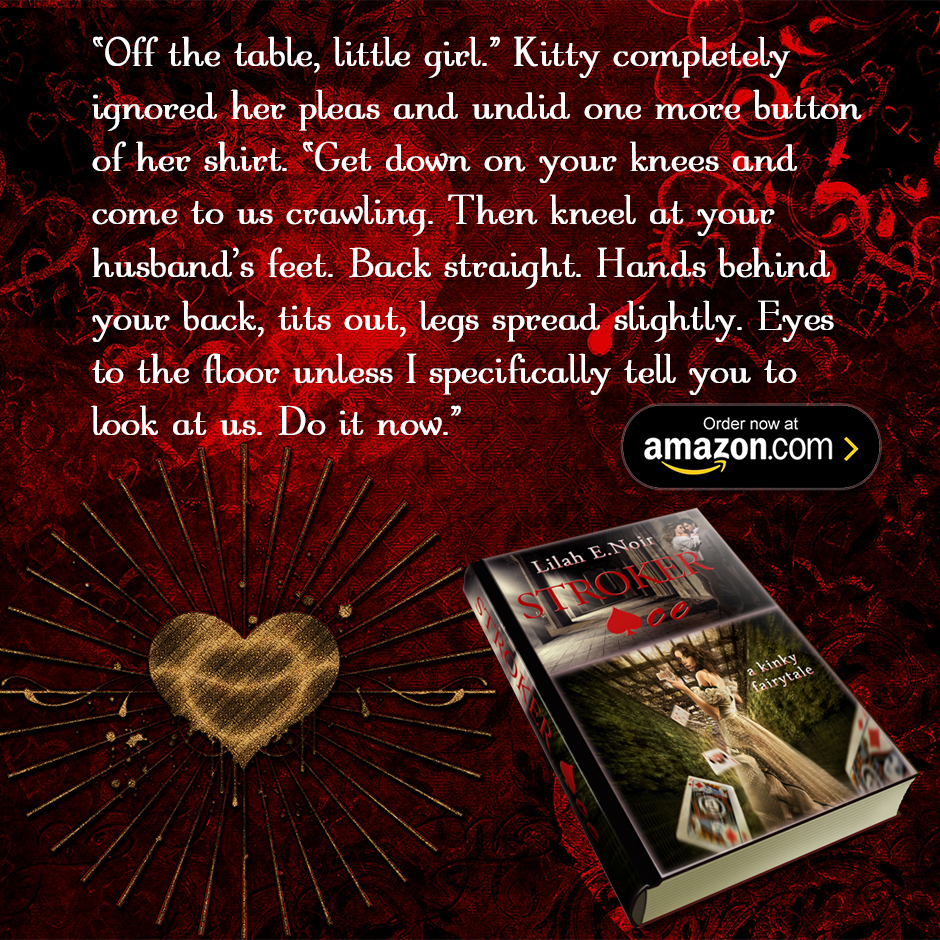 “So… we have general bitchiness, bad personality, and self-denial. You’re in for some punishment tonight, sweetheart. We will start with good old spanking. Climb on my lap so I can show him how you long to be disciplined. Twenty smacks.”
Annabelle is a lady, intelligent, classy and sexually repressed. After a night of drunken oblivion, she submits both to her dominant husband Evan and her own filthy, hidden desires. Little had Evan suspected what a wild and dirty yet obedient pet his wife could be.

A year later their once perfect marriage is on the verge of falling apart. He must deal with her angry accusations and hostile attitude. She has a hard time admitting her submissive nature and frequently lashes out at him out of guilt and shame.

Enters Kitty, a mysterious, charismatic woman armed with a deck of cards, steely dominance and a bag of sex toys. What happens when Evan and Annabelle are faced with her dark game of seduction?

Will Evan hold back his urges? Will Annabelle still be her proud and arrogant self when she gets subjected to stern discipline and humiliating play under Kitty’s thumb? Will their marriage be completely destroyed or reinforced by another night of indulging their kinky side?

Annabelle froze at her spot and gulped heavily trying to find the voice of reason. It told her
she could have gotten away with one simple “red”. Just one word and the humiliation would be through.
She crawled to Kitty’s chair and carefully pushed her small body up so she would lie on top
of her legs. Evan pulled his chair aside so that his wife’s face was facing the bulge in his pants. She pressed her tits to Kitty’s gathered legs and rested trying to calm her breathing. The velveteen fingers that ran over her exposed butt cheeks were deceptively soft. Kitty squeezed her and pressed her long fingernails against the tight anal ring. Annabelle made a cute whimpering sound and gasped spreading her legs a little bit.

“So eager…” Kitty licked her lips and pressed the palm of her left hand to her pet’s neck. She raised her free hand and brought it down to Annabelle’s uplifted ass making her cry out as her flesh shivered with the sudden pain. Annabelle bit her tongue and breathed through the physical ache. To her utmost surprise, her body reacted so well to that cruel treatment. Before she could ponder any further her cheeks stung once more as Kitty followed the first smack with a harsher blow causing Annabelle to sob out loudly.
“Count, little girl. That was number two. You will count no matter what until we reach
twenty.”

I hope you’d choose a lovely poison of your taste. Meanwhile, if you want to stay up to date with any next prickly promotions I have, feel free to join my mailing list at http://eepurl.com/b4sN_H. If you are on Facebook, you’re more than welcome to my group of Ferocious Foxy Fans – https://www.facebook.com/groups/1891568921064761/. 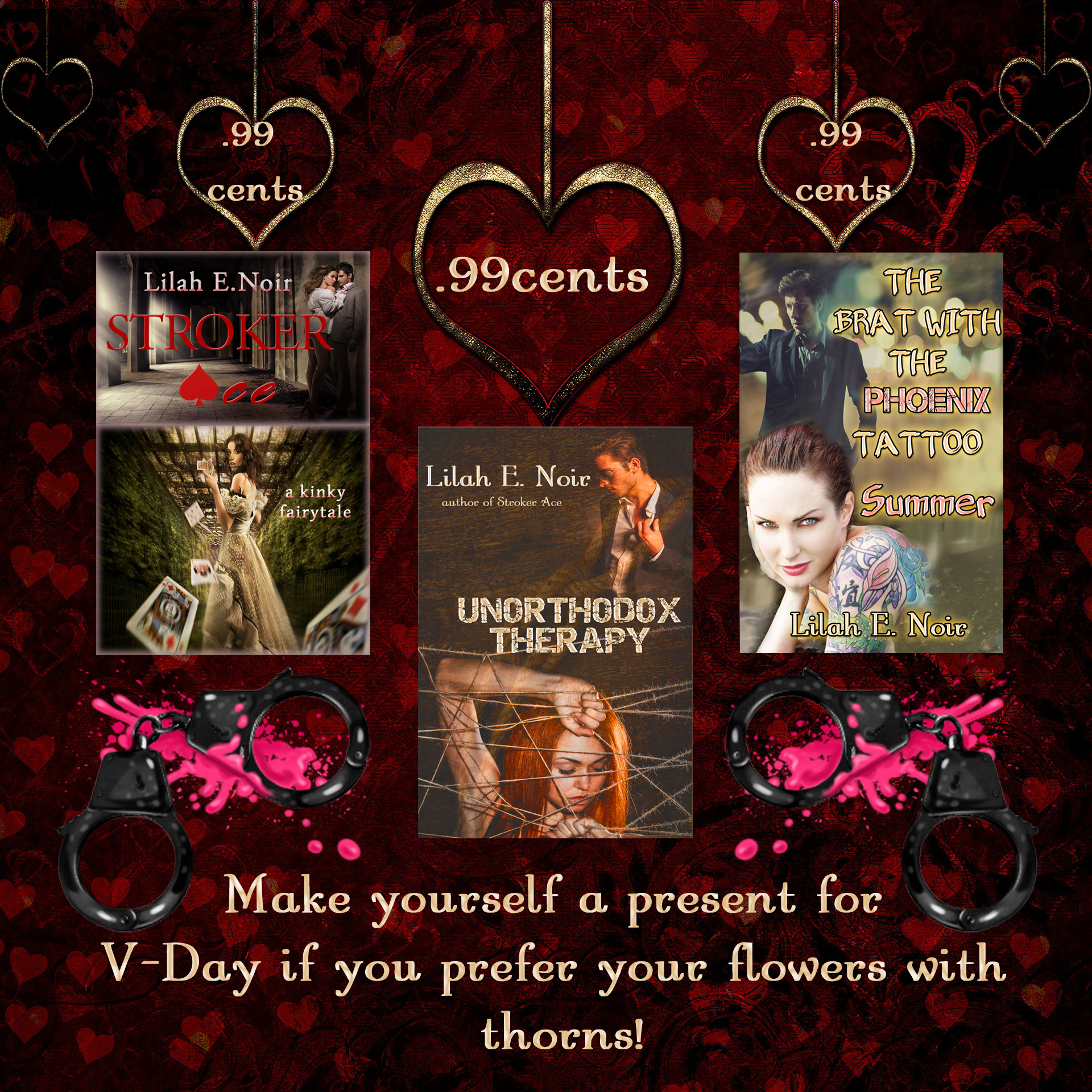 4 thoughts on “Valentine’s Day Sale: F**k The Roses, Send Me The Thorns”