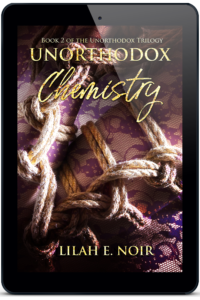 He was her Master, lover and the only man who truly knew her. She was his pet, best friend and the love of his life. Sometimes that’s not enough.
LINA
He’s gone.
His absence hurts more than any whip.
Thomas saw me for who I was.
Strong on the outside, fractured and vulnerable on the inside.
Every day I struggle to rebuild my life.
I miss him. His rough passion and his affection.
I know we’ll never be together again, I even tried to move on…
… and then one invitation changed everything.
Do I dare to say no to the greatest temptation?
THOMAS
I had to walk away.
Lina paid dearly for my mistakes.
She needs to heal and all that’s left for me is to wait.
In the dark, with nothing but my demons and sins to keep me company.
The memory of her is a bittersweet torture, one I didn’t think I could ever escape…
A year later, at the kinkiest club in town, I saw her. On the arm of another man.
May the seduction begin.

She shifted in place and spun her wrists in the tight bracelets to test their sturdiness rather than to set herself free. She trembled again and her skin rose into goosebumps under the warm glow of the table candles. Another lightning strike fell and made her lurch forward in the chains in shock.
I circled around the cube, moved behind her and pressed my body against hers, allowing her to feel my erection and my arms around her waist. The soft gasps of horror grew into louder sounds of pleasure when I pressed my lips to the side of her neck, fondled her breasts and squeezed her nipples. My clasp was as tender as possible when I left a line of wet kisses from her earlobe down to her collarbone.
She moaned and tossed her head back when I hooked my fingers into her wet cunt, grabbed the thick foxtail and pushed it deeper inside her. Her walls were soft and coated with silky wetness, a fragrance I could never mistake, even with the aromatic wax lingering in the air. She clenched her muscles tight around me when I picked up the speed of my fingers and gyrated the plug to ease her even more. Her hands clasped into fists and she barely balanced on the swinging chains.
Slick, profuse juices were gathering in my palm when I pulled out to give her pussy lips a loud slap. She let out the first real scream of pleasure for the night, parted her legs wider and raised her ass. The foxtail was brushing against the bulge in my pants while her naked body was dancing and her feminine crotch was grinding against my evasive fingers. That was the moment to tease her, never give her that deep, intimate touch. I let go of the fur I’d been clasping, spanked both her ass cheeks and let the warmth of the mild pain spread through her system.
She leaned her head back and rested it on my shoulder. She breathed heavily and stared up at the metal grid while her aroused clit was throbbing. I grabbed her ponytail in a firm, possessive way and forced her to bend further, to raise her bust and present herself to me as a gift, voluptuous, with hardened, pulsating nipples.
It was just my imagination but it felt like the elements outside were playing voyeur to our scene. Every time Lina screamed out with the teasing and warm-up spanking, new thunder shattered the air. The wind was a horny she-wolf provoked by my lover’s wild screams.

Lina picked up a bottle of white wine from the shelf and looked back at me.
“I’m not sure what you have planned but I could use a drink. You know, for relaxation. Would it be okay?”
I pulled her by the hips, kissed her and rubbed the back of her neck.
“I’ll make sure you’re relaxed enough without the extra lubrication. Still, it wouldn’t hurt. No more than half a glass per meal, and we’ll have coffee afterwards.”
She trembled when I leaned to whisper in her ear and bite it.
“You’re right about one thing, Lina. I do have plans and I want you sober, alert and dripping.”
Lina rolled her eyes, pushed me away with a light grin and left the bottle in the cart. She made sure to bend over more than necessary so her dress would cling to her hips.
“Same old. You love to boss me around and make me hot and bothered in public places.”
I smirked at her.
“Is that a complaint? We both know you love being teased into submission. Now, we’d better go if you’re done trying to pay me back with my own poison to earn a punishment later.”
After a little spicy argument at the checkout, I paid the bill and we headed out into the ice-cold morning. Lina gave me the directions to her address, and five minutes later we were standing on the wooden porch with our bags.
I looked around while she took the keys out of her purse. Her house was right on the coast, close enough to town. Still, the area had a sense of wildness to it. It opened onto a white sandy lot covered in marram grass, overgrown rocks with a view to the ocean. A small pathway led down to the beach itself. It must’ve been fantastic to be here in the high summer season, with nothing but blue sky and infinite ocean washing the sand below.
I’d have appreciated the austere beauty of the landscape more if it hadn’t been for the vicious winds blowing our way. Waves crashed against the shore with a threatening roar. The clouds gathering on the horizon were slowly spreading across the sky. Lightning flashed for a fraction of a second and distant thunder followed it.
Well, we’ll be stuck inside for a long time, I thought with a smirk.
Lina opened the sliding door just in time before the first raindrops fell on the porch.
“Bikini weather,” she mumbled as we brought the luggage into a sort of living and dining room combo.
“Oh, come on, it’s not that bad,” I said, carrying two of the grocery bags. “You know, it may seem strange but I’ve never been much of a beach lover. Indoor activities are much more fun.”
“You miss the finer things in life.” Lina laughed, took her coat off and hung it on a hook on the wall.
“What can I say?” I shrugged, approached her from behind and hugged her. “I’ve got all I need right here.”
She let out a happy sigh when my lips pressed to the side of her neck. I crossed my palms over her stomach and pulled her closer.
“This place is lovely and it suits you.”