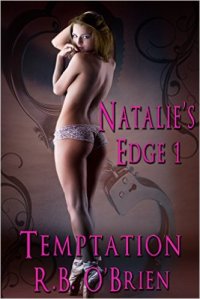 Blurb: He didn’t think he was capable of love; she thought she had everything she ever needed. But when former ballet dancer and entrepreneur Natalie Smith and environmentalist Michael Black meet, they are thrust into a headlong relationship that may devastate them both.

Falling almost too fast for this enigmatic, controlling man, Natalie is both excited and terrified by the fine line Michael walks between his dark and light side, as he introduces her to a world of games, bondage, and punishments. And to her surprise, she likes her submission. She likes the control he wields. And he cannot have it any other way. He likes to bring Natalie to the edge, and she likes the edge he brings her to. Pleasure has never felt so good.

But can Michael fully let go of his trust issues and fall in love? Or will his past leave Natalie on the edge of pain?

Review: You live your ordinary life and you think you have it all figured out. After all, you are pretty successful for a young person in their late twenties. You’ve got a job that you enjoy, your own business, a steady income, not such a steady relationship but hey, it lasted more than two years and you’re happy. Most of the time. And then during one seemingly ordinary day as you go about your daily activities, hurrying up for you’re already late something happens. Or someone. Your whole life, your carefully constructed plans and ideas of yourself are smashed to pieces by a single encounter, as bright as a shooting star that leaves you blinded and begging for more. And once you open your eyes after that clash that changes everything you’d never be the same. Ever. All you can think of is “What the hell happened? And why should I be bothered? I’m happy. Right?”

That is exactly what happens to our girl Natalie, the heroine in the Natalie’s edge series, a tale of love, obsession, kinky sex, doubt, insecurity, fall, disgrace and all kind of emotions rolled into one. She is the kind of girl who wears her heart on her sleeve and that shows in every sentence of these books by the young author R.B. O’Brien. Every sentence is vibrating with genuine feeling and makes the reader empathize with Natalie and walk every step of the way with her. It is not always such an easy journey. Sometimes I wanted to hug and comfort her as she was unraveling and going through the transformation from the girl she thought she was into the woman she was meant to be. Other times I rolled my eyes at her and told her that she should finally grow up. Her new sexual experiences and all the hot, kinky scenes in the series made me breathe harder and wish I were really in her place. If you read that book make sure that you’re not in public during some of the NSFW scenes.

The writing is beautiful and emotional and the characters are flawed, complex and easy to identify with, even when they act more like confused teenagers rather than adults. And maybe exactly because of that. Human beings are imperfect and they often make tons of mistakes on their way to one another. These lapses in communication, inability to be honest and open are even easier when you’re under the strong, sexual spell and you hurt on the inside every time you’re not close to the object of your lust.

The story is simple and yet it draws you in from the first lines. Natalie meets a tall, dark stranger who is determined to test how strong she actually is by putting her through her paces. Michael sure makes her work hard for every small reward, even for giving her such a simple piece of information as his first name. She doesn’t know the first thing about him and yet that simple elevator journey they share excites her even more than sex with her boring boyfriend of two years. It confuses her mind of a strong, independent woman but Natalie can’t help it. The lust and sexual attraction are too much and go both against her feminist views and Catholic guilt. I liked the fact that she was a normal, young woman who has had her fair share of sexual experience even if her true desires are yet not explored. She is smart, well educated and a proud owner of a fashion boutique. It is always fun to watch an obvious control freak to surrender her defenses. At times Natalie struck me as a bit too emotional for a business woman but I loved the fact that she was successful and money were never a factor in her relationship with Michael. It’s not a story of a billionaire who sweeps a starving, mousy girl off her feet and dazzles her with helicopter rides and his wealth. Her life is far from picture perfect, though. She is familiar with the pain of always trying to fit in, to be perfect to please, the ache of giving up on her beloved ballet dancing. But still, life is good for and she hadn’t realized how sexually and emotionally repressed she was from hiding and denying. That short moment slowly began to melt all the inhibitions that stopped that prim and proper girl had.

Enter Michael L. Black. If that guy was a woman he’d be the ultimate Cocktease who flaunts all the pleasures she can give you and then leaves you, hot and bothered, with a raging erection and a need that no one else can satisfy. He recognizes Natalie’s submissive nature, her need to give up on control and sure as hell knows how to take advantage of all of her weaknesses, how to push her buttons and leave her a panting mess. Michael has some of his major asshole moments. I won’t give any spoilers but over the course of the novel I really wanted to kick his ass. However, as much as he irritated me at times, he wasn’t a crazy stalker with short temper who abuses the heroine and makes her walk on eggshells so she wouldn’t set him off without even knowing why. At times his behavior with Natalie was borderline abusive and cruel. But I don’t think he ever truly meant to abuse her. Michael was more like a person who has learned all about the female body, our visceral reactions and how to constantly keep us on the edge but who knows nothing about feelings. Some of his reactions showed complete ignorance of the fact he was hurting people. I can say I liked him and could identify with his insecurity, trust issues and restlessness. He was also pretty consistent with his passion for the environment and was capable of being caring, loving person. Michael was also the ultimate fantasy of every submissive girl who enjoys sensual torture and intense orgasm denial. Some of the things he did to Natalie, especially during her famous punishment dinner scene were nothing short of sinfully delicious. At times his tendency to repeat himself about how he loved being in control was annoying but he meant every word.

There are readers who would probably take issue with the fact that Natalie cheated on her boyfriend with Michael. That just enhanced the story for me and gave it a much needed spice, angst and conflict. Frankly, I wouldn’t judge her. Perhaps Natalie should have been honest with herself, Michael and Scott but don’t we all make mistakes? Especially when we suffer from lackluster sex life, boring relationship and inexplicable needs? She kept repeating to herself that Scott was such a nice boy but quite honestly, he didn’t struck me as that “nice”. We don’t get to learn that much about him but he certainly lacked motivation of making his relationship work. The first scene in which Scott makes an appearance pissed me off a little. Probably because I’m sick of the society’s attitude that you’re a whore if your lover doesn’t satisfy your needs but you should be okay with that because he is “such a nice guy and treats you so well”. There wasn’t much of that fine treatment either – he is a guy who gets himself off with his girlfriend and doesn’t even bother to try and make her feel good. He also allowed his catty female boss to openly attack the mentioned girlfriend and then accuses her of having an attitude. I’m not saying that cheating is the solution to the Boring Boyfriend Syndrome and Natalie could have handled the situation better. But I can understand why she did the things she did and why she was unable to stay faithful to Scott. If I were her, I’d probably cheat on him as well. Be honest, ladies, wouldn’t you?

But don’t think that the series are in favor of cheating. Natalie pays for her dishonesty in one of my favorite scenes in which “I’ll have you for dinner” takes a whole new meaning. I could understand why Natalie fought against her needs and Michael’s urge to dominate her sexuality. Though I think that the conflict with her feminism views was a bit exaggerated. After all, Michael didn’t want her to give up on her right to vote, have a job and property. He had no misogynistic views or need to demean women and put them in their place “because that is how it is natural”. His wish wasn’t even for a 24/7 slavery relationship. She could totally be a successful, intelligent woman who enjoys submission in private. Maybe it is because I’ve always been a sex positive feminist but Natalie worried over that way too much. These unlikely lovers had a lot more pressing issues to deal with on the way to happiness.

The heat between Michael and Natalie seemed to increase as they progressed in their affair, just like their conflicts and fights. They had the occasional light moments that made me feel relieved of all the angst, some humorous, cute scenes that made me endear to them. After all, a relationship that relies entirely on sex and chemistry is bound to burn its energy at some point and leave the characters with nothing but emptiness. I liked their conversations and moments of tenderness, aftercare and laughter. Without them the book would be a pretty pointless transition from one sex act to another.

Another thing I loved was that the author had avoided the usual trap of making every other female except for Natalie a horrible, disgusting human being or a nasty, good for nothing slut. Even some of the characters we were supposed to dislike – Scott’s boss, Michael’s ex – had something positive about them and felt like realistic characters. I’ve been a little nervous at the appearance of her best friend Patricia who instantly formed a bond with Michael. To my relief there was no subplot in which the two former best friends become mortal enemies over a man they both fall in love with. Natalie and Patricia were adorable and their friendship was one of my favorite aspects of the whole series. You could tell these two were there for each other and even the long distance didn’t have an effect on their connection. I thoroughly enjoyed the evening Michael, Natalie and Patty spent together over wine and guitar music. And no, get your minds off the gutter, there was no threesome.

So, while Natalie’s Edge has its angsty, dark moments I’d say that the author knows well how to balance between pain and pleasure, torture and delight, laughter and tears. The finale was laced with drama that culminated in one surprising, happy revelation for Natalie. But don’t let that fool you, just the circumstances in which it happened should point you they have a long way to walk till they learned to trust and love each other.